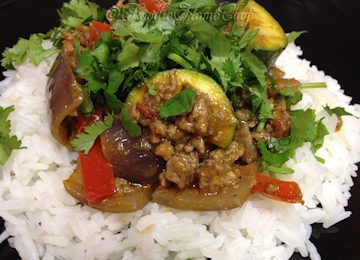 Madras curry is a fairly hot blend of herbs & spices that originated in southern India. While you can create your own Madras curry spice blend & sauce to cook with, this version is made with a delicious organic premade sauce that cuts your cooking time down to a minimum. Best served warm, not hot, on a bed of Jasmine Rice & accompanied by heated Naan bread smeared with my Peach Apricot Ginger Spread, making a spectacular meal!

1. In a 4 or 5 quart Dutch oven, cook & stir ground beef over med-high heat till cooked through (no pink). Drain off liquid & return to pot.

2. Add the entire jar of Madras Sauce & stir till combined. Cover, set aside & let sit 45 min to 1 hour to absorb the sauce.

3. While waiting, cook the Jasmine Rice & set aside (see recipe in the Rice & Grains category).

5. Add vegetables, along with pan drippings, to meat sauce. Stir till combined. Cover & simmer on med-low to low 2 to 3 minutes, give it a stir & remove from heat.

7. Add some rice to each plate & make a well in center.

8. Spoon desired amount of Madras Stew in the well. Garnish with cilantro, if using & serve with Naan bread on the side.

2. You can replace the zucchini with another vegetable of your choice.

3. If you’re not familiar with Naan bread, you’re in for a treat. Naan is a delicious, soft, hand-stretched flatbread made in a traditional fashion in a high heat tandoor oven. Most larger supermarkets carry it these days & it’s usually found, prepackaged, in the bakery area. You can even freeze the package, as is, for months & the bread still tastes fresh when you defrost it!